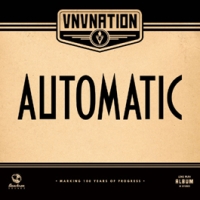 With their unique and formidable ability to combine very melodic, danceable electronics with haunting and powerful lyrics, electronic rock pioneers VNV NATION have built up an enormous fanbase, playing to hundreds of thousands of fans at both their own sold-out shows and major festivals worldwide.

On “Automatic”, their widely-anticipated new studio album, Irish/English bandmates Ronan Harris and Mark Jackson have been hard at work crafting something far more conceptualized and thematic than previous releases. Calling the new album an “opus of retro-futurism”, Ronan has been streamlining the music, artwork, and imaging of this album into a concept that encompasses the industrialization and technology of late 30s America while embracing the technology of today.

In support of the release of “Automatic”, the band start an ‘extended live set’ world tour that will launch in Germany on September 6th and which will take them around the world.