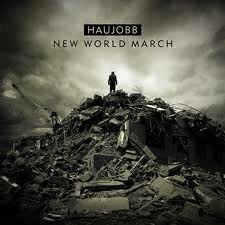 Eight years after their last release, legendary electronic project HAUJOBB’s new album “New World March” is finally about to see the light of day! Of course expectations are incredibly high – not least because of the previously released single “Dead Market”, which made it into the top three of the German Alternative Charts, as well as the electronic web charts for a total of eight weeks!

“New World March” follows the path set by Daniel Myer and Dejan Samardzic with “Dead Market” – it clicks, it cuts, it rumbles, it literally electrifies everywhere. “Manipulate the pulse – dominate the beat” is the dictum for the entire album. Everything is as it was – only even better than ever!

HAUJOBB have been, are, and will always be a highly explosive electronic bomb. With “New World March” they deliver the perfect ignition device, ready to be activated. Get ready for HAUJOBB’s sound splinters penetrating your ears without compromise, and be sure this ‘explosion’ will last for a very long time!

As with the “Dead Market” EP,  the new album also comes in a very special limited edition… a 2CD version, housed in a six-panel, DVD-sized digipak. The second disc is an EXCLUSIVE remix-album, featuring work from such acclaimed electronic artists as AH CAMA-SOTZ, THIS MORN’ OMINA, DUPONT, XABEC, SOMATIC RESPONSES, DUPONT, BINARY PARK, DRYFT and others.