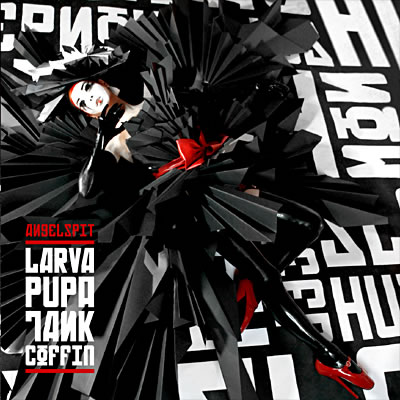 Angelspit’s new remix CD “Larva Pupa Tank Coffin” mutilates the darker side of Electro with 4 new tracks and 7 remixes (3 by Angelspit) giving a deadly 11 track remix CD. Angelspit has once again produced stunning and elaborate photography and artwork. The remix CD will also be accompanied by a new video for the track “Sleep Now“.

The four new Angelspit tracks include:

is a fast and furious vixen driven track with a hard hitting dirty edge. This track was recorded with a 70s punk approach, where Destroyx’s vocals were recorded on the first take while Angelspit’s huge Doepfer Modular Synthesizer was improvised live.

is a disturbing instrumental that drags you through an 80s sci-fi noir with V8 driven intensity. It features a chaotic solo by Zoog where he plays an electronic musical instrument which Angelspit designed specifically for this track.

“Hell was made Flesh”

is an exercise in self reflection and slow annihilation. The track features several large scale acoustic instruments built by Angelspit to create a uniquely haunting atmosphere.

is a completely new style from Angelspit – blip-pop meets pixilated vocoder funk with frantic beats, fat gameboy sounds and all the psycho-brat energy typical of Angelspit. This track was recorded naked.