(Reviewers note : Even though this is not the place where a review like this would usually show up , this band is a cult figure and once again has released such a masterpiece , that it would be a shame not to give it the praise it deserves .) 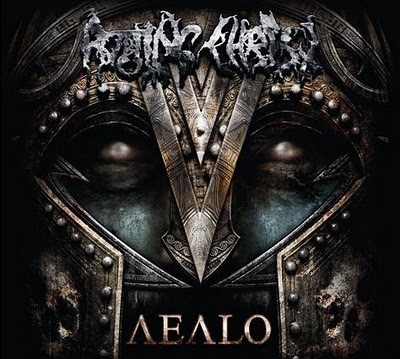 Having been literally brought up with this band for the past 17 years, I have nothing but admiration and respect for them not only as musicians but also as individuals. Their newest release Aealo is nothing less than a masterpiece. A true gem. A combination of classic HELLenic underground metal, memorable riffs and folklore melodies that honor their heritage and make the hairs on the back of my neck stand up!

With many notable guest musicians (Alan of Primordial, Magus of Necromantia, Diamanda Galas, Dirty Granny Tales, Δαιμόνια Νύμφη and the “Πλειάδες” choir of Ipirus) the album starts off with “Πλειάδες” chanting throughout the whole title track “Aealo” , which is a classic fast speed RC structured song . Without break, “Eon Aenaos”, blasts into play with riffs and drums of war . “Demonon Vrosis” was the first track that stood out to me, as it compiles ancient greek chanting and a riff that sticks in your head with layers added on top of each other. Slowing down the pace, “Noctis Era” will bring back memories from days of old greek black metal with an epic guitar melody accelerating slowly . The oddly named “dub-sag-ta-ke” and is fast and aggressive, combining choir chants and something that sounds like a traditional bag-pipe (?) ! Really powerful tracks! “Fire Death and Fear” is the epitome of epic majesty, with bass lines that are calling you to battle. “Nekron Iahes…” is an instrumental by “Πλειάδες”, sounding like a death chant and the perfect intro to “…Pir Threontai” which should have been written for the soundtrack of “300”! Three (if not more) layers of guitars for a massive sound and an amazing melody that will take the listener to ancient Sparta. Slowing down the rhythm again “Thou Art Lord” brings Alan (of Primordial) and his amazing epic vocals … a great combination of Celtic and Hellenic tradition. As the song ends and leaves you floating, in comes “Santa Muerte” to knock you back in your seat with fast drums and guitars while in the background the “Πλειάδες”chant their cry . One of the best songs in RC career.

The final track “Orders From The Dead” is nothing new to me, as I am a major Diamanda Galas fan and consider her to be one of the most important artists of our time. The collaboration with Rotting Christ gave birth to possibly one of the best cover songs I have heard. A song written about the Greek genocide during the Asia Minor catastrophe. Crushing lyrics that paint a picture of the macabre that took place and a melancholic melody that elevate this mastepiece to the pantheon of music! An absolute cornerstone for generations to come!

I conclude by giving this album the highest place in my record collection. Sakis , my brother , and Rotting Christ , you honor us with Aealo . Thank you!

Rotting Christ will be appearing at this year’s Wave Gottik Treffen on the 22nd of May .