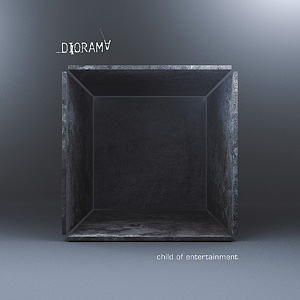 It always comes down to a mcd or EPs that just get me thinking about what a waste of money not only for the consumer but also the record labels. Some EPs are SO worth it with new tracks , cover versions and a couple of remixes , but in this particular case it is not .Diorama begin the year with their 7 track mcd which is nothing but 1 new song (in 5 remixes) and 2 old favorites in a live edition and a remake .

Their newest effort “Child of Entertainment” is a classic Diorama tune with recognizable beats, keyboards and the characteristic vocals of Torben Wendt. In more detail , “Cubed” and “Clubbed” versions are what are more notable to the sound you would find on their albums .“Trapped” and “Broken” are renditions of the title track in a jazzy / chill out version and then played on piano respectively with Torben singing – nothing new to my ears since it is a formula they used on “Synthesize Me” a few years ago. The most interesting and different would be the “Stolen” edition which is extremely experimental even for Diorama. I think this is something that will make allot of people scratch their head and wonder with vocals being shouted instead of sung in a more old-school EBM fashion — Very interesting and intriguing for my taste ! The remake of “HLA” brings back wonderful memories from good old times in 2002. Overall something old and truly beautiful brought to a 2010 edition. I won’t even bother dealing with the live edition of “Advance” since I do not like live versions at all … I prefer listening to the original version.

Having been a huge Diorama fan over the years, and enjoying their melancholy, I get a feeling that they are huffing and puffing the same recycled material . I will have to hear their new album “Cubed” out in March to get a full perspective of their intentions . Let’s wait and see …